acrylic and Kuricoat C-720 on panel

Be it ever so beautiful. There is no place like home, 2015

Mars Disarmed by Venus and the Graces, 2015

The artists in The Spaces We Know represent a new international artistic platform where the exchange of ideas and information flow freely. Each artists’ work transcends the boundaries of their origins yet is undeniably imprinted with textures from their distinct backgrounds. Cultural heredity, personal memory, and current reality infuse each of their narratives and their practice reflects the creative possibilities of the next generation of the Asian diaspora.

Born into a family lineage of Chinese artists, Wang JiaJia reinvigorates the tradition of landscape painting with new attention to subject matter. In Be it ever so beautiful. There is no place like home, the title is culled directly from The Wizard of Oz. JiaJia created the piece after discovering an old VHS tape of the film and trying to explain the plotline to his mother who had never seen the western classic. Despite his explanation, his mother could not comprehend the narrative or purpose of the film. Specifically, the scene where Dorothy’s world shifts from black and white into Technicolor was lost in translation. This is a consistent obstacle JiaJia has faced in China: artists from his parents’ generation often question the content and concepts behind his paintings. JiaJia paints from a base of familiar Chinese imagery while allowing various modern narratives play out through the process. The end result is disruption of conventional image making through the convergence of contemporary and traditional visual cultures.

Hidenori Ishii’s IcePlants series is a direct response to the 2011 Fukushima Daiichi nuclear power plant meltdown, aftermath, and ongoing physical and metaphysical transformation. Having spent his childhood playing in the area, Ishii initially felt an aversion towards the industrial site that caused the disastrous and tragic incident. However, after seeing the deserted landmark, Ishii grew fascinated by the aesthetics of the manmade structures and the resurgence of local fauna that began to overtake the buildings. While reflecting on a catastrophe from the recent past, Ishii also looks forward and contemplates the transformative and erosive environmental process over time. His work points to a hopeful future where humans and nature coexist and sustain one another.

Guo Hong Wei investigates the visual history of systematic classification in a series of watercolor paintings that form a cabinet of curiosities. By isolating plant, animal, and mineral forms on paper, Guo plays upon the viewer’s knowledge of scientific and detailed presentation of natural history. The result is a visual meditation of specific plant life, their relationship to one another, and connection to the viewer. The artist is an avid collector of objects and the memory of these objects is reflected in his painting practice.

Notions of identity and memory are physically carved out in Jed Foronda’s works. Foronda cuts through layers of paper, including magazines and periodicals, purposefully redacting specific sections of imagery while retaining others. His intuitive process of excavating patterns subverts the original context of the material, shaping it through his observations and memories. The final image projects shared histories and consciousness through a mixture of familiar imagery and abstraction.

Inspired by Korean history and contemporary happenings, Jin Joo Chae’s works explore larger social and cultural issues. While studying abroad, Chae closely followed coverage on the rising military tensions and threats of war between South Korea and North Korea. She found a curious anecdote on the use of the popular South Korean snack Choco Pie to defy the North Korean government. The sweet treat is given out in lieu of forbidden cash bonuses to North Korean workers in the demilitarized Kaesong Industrial Complex. Building on this symbol of subversion, Chae uses the strategy of propaganda, such as the Coca-Cola logo and sensational North Korean newspapers, to achieve political impact. 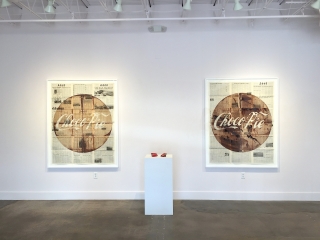