Octavia Art Gallery is pleased to present an exhibition of mixed media works by gallery artist, Nall. Over his extensive career, Nall has garnered both regional and international attention with an extensive body of work that includes painting, mosaic, sculpture, etching, costume, set design, and porcelain. In this exhibition, Nall focuses on a variety of subject matter, including the flora and fauna of the Southern United States and France.

Nall, a Troy, Alabama native, received his BA in Art, Political Science and Psychology from the University of Alabama. He also attended L’Ecole des Beaux Arts in Paris in the 1970s. While in France, Salvador Dali, became his mentor and primary source of inspiration. Throughout his career, Nall has also been influenced by American psychedelic art, fauvism, impressionism, and Japanese wash.

In addition to the artist’s sumptuous and meticulous handling of his subject matter, there is often complex meaning to be found hidden just beneath the surface of his visually dense works. To investigate these themes, Nall typically utilizes several techniques, processes, and media to create each work. Often starting with a drawing or print, Nall then constructs elaborate frameworks for each image out of driftwood, mosaic tile, and found objects, which makes the frame an integral component to the overall piece. Nall blurs the line between the two dimensional lexicon of drawing and painting and the three dimensionality of sculpture, allowing his work to inhabit a liminal space.

Nall lives and works between Fairhope, Alabama, Monte Carlo, Monaco and Vence, France. Nall and his work have been acclaimed by CNN, The New York Times, The Wall Street Journal, USA Today, Time Magazine, the Italian Republica, the French La Figaro, and The LA Times. In addition to his artwork, Nall founded the N.A.L.L. Art Association in Vence, France, an institute to train and educate young artists. 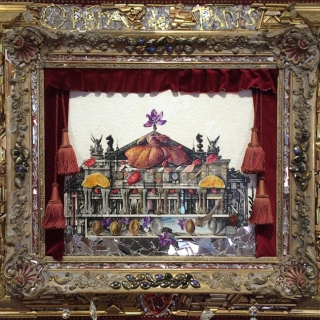 Nall: Out of the Box