Octavia Art Gallery is pleased to present new work by artist Michel Varisco. This will be the artist’s first solo exhibition with the gallery.

Varisco’s Fluid States is a series of photographs and installations that depict water’s complexity, importance and interconnectivity with all life. The images are a study of fluidity: from a river moving sediment, to an ocean full of plankton, and a gyre of accumulated plastics, water flows indiscriminately. Water is the quintessential shape-shifter of light, color and form and it’s also the universal transporter of everything in between.

Particularly important to the show are images from Louisiana’s waterways, and the rich, varied life above and under its watery membranes: duckweeds and marsh grasses, celery leaf buttercups and creeping primrose willow-often quietly purifying the waters it inhabits. The life forms of a delta system are breathtakingly beautiful but along with the beauty also come a warning. For example, in Louisiana, when salt water moves too rapidly into freshwater ecosystems, life balances are upset. And when water is limited in its flow of sediment laden freshwater - the state of Louisiana literally dwindles. The beauty of being downriver can have a shadow cast over it by a dead zone created in large part from upriver release of chemicals and fertilizers.

Science has shown that there can be 20,000 living organisms in one quart of water. Artist Michel Varisco is fascinated by the natural abundance of life forms found in water, and it’s from that place of wonder that her work has emerged. Varisco is an artist whose work has focused on the environment for many years. For this series, she traveled throughout the world to study water, and to contemplate our own interconnectivity with it.

Based in New Orleans, Michel Varisco received her BA from Loyola University in 1990 and her MFA from Tulane University in 1995. Her work has been included in both national and international group exhibitions and she has had several solo exhibitions in New Orleans and throughout Louisiana. Her work is included in a number of private and public collections, such as The Ogden Museum of Southern Art, the National Library of Paris, Loyola University of New Orleans, Gulf Coast Bank and The SURDNA Foundation. Fluid States is supported in part by a grant from the SURDNA Foundation. 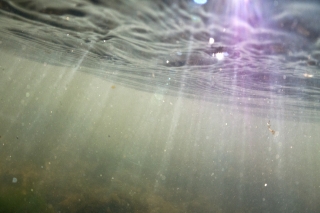