Leslie Wilkes’ pieces are an explosion of shape and color. With near perfect symmetry, these works exhibit opaque, smooth, sumptuous surfaces. “Wilkes’ geometric patterns are unique in that their repeated patterns tend to expand outward from the exact center of the composition.” [1] Stimulation of the visual experience is of great importance to Wilkes, who chooses nuanced but dissonant colors to keep the eye moving around each piece. Slight irregularities also create subtle shifts in the pattern, as the artist does not use tape or outlines on her works on canvas. “Her geometric abstractions are uniquely her own, a twenty-first century response to geometric painting explored in Europe and America in the last century.” [2]

Wilkes has always been attracted to bold pattern and bright color. As a child, she made Cray-Pas and felt tip pen replicas of her psychedelic curtains, her flowered bedspread, and her favorite Peter Max beach towel. She was captivated by Milton Glaser’s poster of Bob Dylan and later influenced by the fashion-appropriated compositions of Bridget Riley. She has strong memories of sewing clothes with her grandmother as a child; each garment relied on the search for paper patterns and fabrics to make a whole and creative ways of making shapes fit together.

Originally from Athens, Georgia, Leslie Wilkes now resides in the small west Texas town of Marfa. She received a BA from the University of Texas at Austin and an MFA from the School of the Art Institute of Chicago. She also attended the Skowhegan School of Painting and Sculpture and was the recipient of the Milton and Sally Avery Fellowship Award at the McDowell Colony. Wilkes has had solo exhibitions in Austin, Dallas, Chicago, Los Angeles, New Orleans, New York, San Francisco and Milan. Her work has been published in Texas Abstract, Modern and Contemporary (2015) and appears on the book jacket of James Elkins, The Object Stares Back (1997). Reviews of her work have appeared in the Los Angeles Times, Chicago Tribune, Denver Times, Dallas Morning News, Southwest Spirit Magazine, Big Bend Sentinel and New Art Examiner. Wilkes’ work is in several private and corporate collections including Memorial Sloan Kettering Cancer Center, NY; Rosewood Hotel, Abu Dhabi; Fairmont Hotel, San Francisco; eBay, Inc, Palo Alto; One Main Place, Dallas; among others. 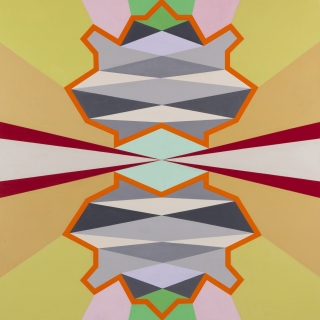