Jeffrey Pitt
Here It Comes There It Goes, 2014
Acrylic and oil on canvas
48 x 72 inches

Octavia Art Gallery is pleased to present Everything is Connected, an exhibit of new works by New Orleans based artist Jeffrey Pitt.

The concept that everything is connected, an idea at once exhilarating and intuitive, is found from the most ancient Buddhist scripts to research in biology and social science. Acknowledging the premise that nothing is more sacred to man than his own history, Everything is Connected takes a look at tribal art, ancient maps, histology, topography, and biology, exploring naturally occurring and man made patterns. These patterns, formed by time and repetition, create a vernacular of shapes, symbols, and colors that relate to the idea of universal connectivity.

Working from both a micro and a macro approach, Jeffrey Pitt’s intricate paintings investigate this shared perspective. With a B.A. in Anthropology, Pitt has a great interest in traveling and experiencing other cultures and places in an effort to observe what makes them unique. In his work, Pitt explores how various cultures’ artistic expressions relate to their environments, beliefs, religions, and means of subsistence. Pitt has developed his own visual lexicon, which can be applied to current situations and arranged in paintings such that the viewer can find symbols and icons buried in the images. The more one engages the paintings, the more images will appear. In many of Pitt’s works, a single line threads its way through the image, creating an improvised composition as well as a context layered with people, animals, or ideas.

Born in 1972 in Wichita, Kansas, Pitt currently lives and works in New Orleans. He attended Tulane University and studied “Alternative Foundation” at the University College of London’s Slade school of Fine Art. His work is included in many notable private and public collections, such as the New Orleans Museum of Art, the Wichita Center for the Arts, and the Ogden Museum of Southern Art. 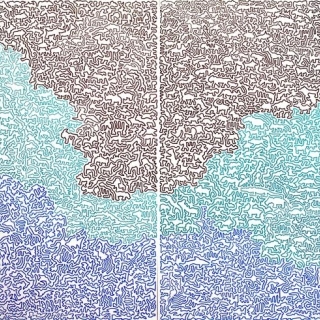 Review: Everything is Connected