Consolations, I Carry Your Heart, 2014

Lightbulb (from the Cotton Mill series), 1997

Acrylic and transfer on canvas

Magnolia (from the Ruminations series), 2004

Inspired by the notion that “every place is unfathomable, infinite, [and] impossible to describe, because a place…[is] constantly arising and decaying,”[1] Alluvial Constructs provides a visual exploration of the intrinsic, unavoidable and poetic processes of construction and degradation. New Orleans is positioned on a plane of soft alluvial soil, built up over time from the Mississippi River’s natural cycle of flooding and erosion. Each new layer of sediment deposited on the banks of the river creates a malleable, amorphous and ever-changing topography. Overlaid on this sinuous and shifting landscape is the architecture and infrastructure of a city. Constructed out of rigid and impervious materials such as concrete, brick and metal, the built environment of New Orleans—like that of most cities—serves as an archeological record and a representation of a shared collective history.

The ten artists included in Alluvial Constructs address this complex idea of a city’s physicality as both an ephemeral and stalwart documentation of place. Their works investigate concepts of materiality, architecture, nature and the passage of time. Artists Anastasia Pelias and Joseph Cohen’s practices are primarily focused on materiality. Their viscerally-veiled, layered paintings and works on paper are about the act of painting; the import lies with the physical presence of their medium and in the compositional topography that results from the artist’s act of mark-making.

Diana Al-Hadid, Regina Scully, Kianja Strobert and Simon Pyle share an interest in architecture and archaeology. While aesthetically disparate, their paintings and mixed media works often depict abstracted, fractured or discreetly rendered glimpses of structures, cities or built environments. The resulting compositions feel sedimentary and gritty, evoking a sense of being unearthed in an arrested moment of decay.

The artistic practices of Wayne Amedee, Simryn Gill, Michel Varisco and Letha Wilson are related through a common interest in nature, questions of sustainability and documenting the poetry of daily life. Typically, these artists use materials and images from nature or their own environments as a starting point for their interpretations. Ranging from documentary photographs to hybridized photo-sculptures and from sculptural iterations constructed out of paper to oversized abstract aluminum forms, each expertly achieves depictions of our collective world that are unexpected and compelling. 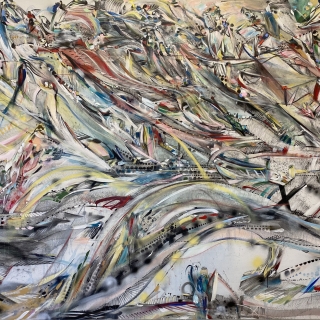 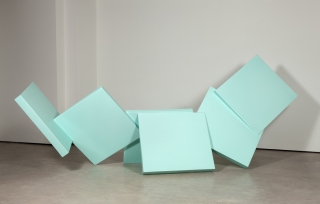